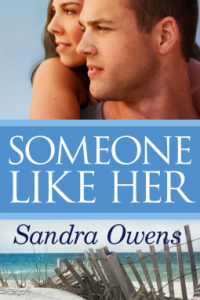 I literally finished this book in a day.  I can't tell you the last time that happened.  Someone Like Her is the second book in the K2 series, which I'd never heard of until browsing on Netgalley over the weekend.  At first, I wasn't sure I was going to like it because I tend to be VERY picky when it comes to romantic suspense and I normally hate anything that has to do with the Navy SEALS.  Those heroes are always way too alpha for me and while Jake has several alpha moments, he doesn't go alphole.  I actually really liked him and his heroine, Maria.  Here's the plot synopsis, via Netgalley:

Known to the K2 Special Services team as Romeo, ex-Navy SEAL Jake Buchanan may spend his downtime living up to his nickname, but there’s one woman who sets his heart racing like no one else can: Maria Kincaid. Unfortunately, his boss—her brother—has made it crystal clear that she’s off-limits. Jake doesn’t do commitment, while Maria is the type of woman who deserves a promise of forever. Yet Maria finds herself drawn to Jake, the man who stares at her with a desire she wishes he’d act on.

Still haunted by her horrific childhood, Maria goes searching for the father she’s never met—and stumbles into a nightmarish experience. With her life in grave danger, she reaches out to Jake, her brother’s second-in-command. Jake figures he can help Maria without giving in to temptation. But some things are easier said than done.

One of the things I really liked about this book was how devoted Jake was to both Maria and her brother, Logan.  Jake is a really good guy, who is torn between his feelings for Maria and his loyalty to her brother, who has made it crystal clear that Maria is off limits to the Romeo (Jake's nickname within K2) of their group.  (I honestly don't get the modern connotation to the name Romeo considering the namesake was in love with one woman and sacrificed everything to be with her.  Here and in many places, Romeo is the name chosen to depict a player and that just doesn't make any literary sense.)

I also enjoyed the chemistry between the lead characters, which was so hot that it fairly smoldered--and, omg the sex scenes were the hottest I've read in a while.

I didn't like everything, however.  This book's biggest problem was that the beginning of the narrative feels like it is picking up in the middle of the story.  We start with Maria showing up at some man's door (based on the cover copy, I figured him to be the long-lost father) and running into a teenaged girl, who was obviously being abused by this man.  Almost immediately, we cut away to Jake, who is in bed with some woman when he gets a phone call from Maria, asking him for his help and begging him not to tell her brother.

During this exchange and several others throughout the book I felt as if I was missing something, as if my copy of the book was unfinished, but considering the book is coming out on the 6th, I doubt this is the case.  It almost felt as if the author skipped writing some scenes, planning to go back and fill them in, but forgetting to do so.  It was really weird.

Also, I hated the excessive use of the word clinched.  First, it was used way too often (I get that we all have words that we love to use--mine is actually--but this was ridiculous).

Second, that word does not mean what the author thinks it means.  Every single time it was used, it was used erroneously to mean clenched.  Jake would clinch the steering wheel or Maria would clinch Jake's man-bits.  You cannot clinch either of these things (and the second, I'm not sure even clenched would be right).  What can you clinch?  The World Series.  What can't you clinch?  Anything in this book.  This drove me batty.  I am a big proponent of using the right words for a situation (as should we all) and this was in no way the right word.  Sigh.

Despite this, as I said, I really liked Someone Like Her and will definitely be looking for the next book in the series, which I hope is Jamie's, aka Saint, book.