Review of "The Obsession" by Nora Roberts 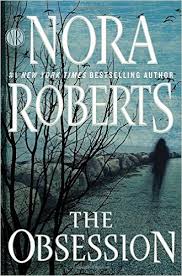 To say I'm a Nora Roberts fangirl would be an understatement. She's been an auto-buy for me for about 14 years, but to be honest, I'd completely forgotten buying this book.  Her last few haven't been great and I was actually considering skipping this one when I realized I'd already bought it.  After reading it, I'm still not sure if buying it was the best plan.

Naomi Carson hasn't had an easy life--at 11 she discovered that her father was a serial killer and was responsible for his incarceration.  Although life got better once she moved in with her uncles, normal was not a word she used very often.  At nearly 30, she's finally ready to give "normal" a try.  She's moved into her very own house in Washington State, has a great boyfriend, and some awesome friends.  What could possibly go wrong?

From the moment he first sees Naomi, Xander Keaton is smitten. She's gorgeous, smart, and funny.  She's also prickly and certain she doesn't want a relationship with him--until she does.  He can handle that.  But can he handle dealing with serial killers and the FBI?

I really liked the first part of the book, which encompasses Naomi's life from the time she finds out the truth about her father until her Junior year of high school.  These chapters were well written and I loved young Naomi's point of view.  My favorite scene is from this section--Naomi has a panic attack at the movies (she, her brother, and their friends were there to see Spiderman) when a trailer comes on for a movie based on what happened with her father.  This was also the scene that made me want her brother, Mason's, book.  This is something that would continue through the entire book.

Once the book transitions from teenage Naomi to adult Naomi it felt like a different book and not in a good way.  I much preferred the first section of the book to everything that came after it.  It isn't that there was anything wrong with the main section of the book; it is just that there was a nice groove going in those first few chapters and the transition was jarring and it took me a little while for me to get used to the change.

Another issue I had was that it took a long time to get to the serial killer at the end of the book.  I imagine Ms. Roberts wanted us to get used to Naomi's new "normal" life before throwing in a curveball, but it just felt like it took far too long for the plot to show up and once it did, the book was pretty much over.

Finally, there's the killer.  I saw it coming from a mile away.  After spending most of the book hoping it was one person, while suspecting it was someone else, someone who didn't even matter to pretty much anything, I wasn't surprised to find that I was exactly right about the identity of the killer.  So annoying.