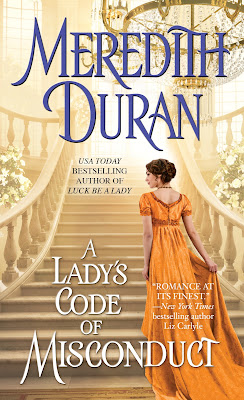 FROM THE USA TODAY BESTSELLING AUTHOR OF FOOL ME TWICE, THE 2015 RITA AWARD WINNER FOR HISTORICAL ROMANCE
AND LUCK BE A LADY, AN RT BOOK REVIEWS NOMINEE FOR BEST BOOK OF 2015 HISTORICAL NOVEL

Praise for A Lady’s Code of Misconduct:
“Political intrigue and conspiracies abound in Duran’s engrossing fifth Rules for the Reckless Victorian romance (after Luck Be a Lady), which boasts plot twists galore…Duran is at the pinnacle of her craft as she weaves together humor, forgiveness, and love in a flawlessly executed plot. Jane, Crispin, and the rest of the characters are all well drawn, and the love scenes strike the perfect balance of steamy and sweet. Each layer in the story is suspenseful and delightful, making this the best installment so far.”
—Publishers Weekly STARRED REVIEW

“A sham marriage, political intrigue, and a case of amnesia provide a backdrop for this absorbing Victorian romance. Although Duran (Luck Be a Lady, 2015, etc.) has written a novel as layered as an onion, the characters are well-drawn and the plot flawlessly executed. Add in some very steamy sex, and the fifth installment of Duran's Rules for the Reckless series can't help but delight. This book weaves its spell so thoroughly that the most fortunate reader will be the one who has time to read the entire thing in one sitting. A masterful tale of suspense, forgiveness, and love.”
—Kirkus STARRED REVIEW

“Political intrigue drives a captivating historical romance…This Regency romance, part of the Rules for the Reckless series, is a smart love story, peopled with complex and absorbing characters.”
—BookPage, TOP PICK IN ROMANCE

“A riveting story.”
—Heroes and Heartbreakers

“A masterful author of historical romances…A Lady’s Code of Misconduct takes worn threads of old tropes, like amnesia and the tortured hero, and weaves them into a lush tapestry with sophisticated, beautiful writing. Crispin seems power-mad and Jane seems saintly, but as Duran slowly unravels their characters amidst a plot of intrigue, betrayal, and dark secrets, we discover they’re more alike than they (or we) realize. The hero is swoonworthy, and I couldn’t help but fall in love with Jane as his flaws shine a light on her own. The tale and characters so captivated me, that I literally couldn’t put it down.”
—Omnivoracious Amazon Book Review by Sabrina Jeffries

“Thoughtfully written and the story creates not just a simple story of two people but an entire world for them to inhabit. If you like your historicals to have some meat to them, I highly recommend this one.”
—All About Romance

“Extremely relevant to our current political state…I could have easily sat and devoured this in one evening as each of the chapters seemed to end on a cliffhanger that just won't let you put the book down. Quill says: A Lady’s Code of Misconduct is the perfect book to sit in your favorite chair with and let the world pass by for a little while you get lost in the past.”
—Feathered Quill

“I absolutely love this series… Meredith writes intelligent characters with a fast paced plot.  Her writing is sensual, witty and totally captivating.  This book has everything you would want in a Historical Romance.   It is witty, sensual with a mystery that will keep you guessing to the very end. Crispin and Jane are extraordinary characters in a riveting story that will leave you wanting more.  The journey of Crispin and Jane to their HAE is fabulous.  I will read anything that Meredith writes.”
—The Reading Wench

“A fun read. I enjoyed Duran’s characters and plot…there’s a villain who made me think of a Regency era James Bond villain.”
—Bookfan

About the book:
USA TODAY  bestselling author Meredith Duran’s A LADY’S CODE OF MISCONDUCT is the fifth sizzling novel in the Rules for the Reckless series—a sexy and evocative Regency romance between a famous heiress and an infamous crime lord.

A DEAL WITH THE DEVIL…

Trapped in the countryside, facing an unwanted marriage and the theft of her fortune, Jane Mason is done behaving nicely. To win her freedom, she’ll strike a deal with the most dangerous man she knows—a rising star in politics, whose dark good looks mask an even darker heart.

The bitter past has taught Crispin Burke to trust no one. He’ll gladly help a lovely young heiress, provided she pays a price. Yet when a single mistake shatters his life, it is Jane who holds the key to his salvation. And in a world that no longer makes sense, Crispin slowly realizes that she may be the only thing worth fighting for...

About the author:
Meredith Duran is the author of ten previous novels, including The Duke of Shadows (winner of the Gather.com First Chapters Romance Writing Competition); Wicked Becomes You (included on the Woman’s World List of Best Beach Reads for Summer 2010), and the USA TODAY bestseller and RITA Award Winner Fool Me Twice. She blames Anne Boleyn for sparking her lifelong obsession with British history, and for convincing her that princely love is no prize if it doesn’t come with a happily-ever-after. She enjoys collecting old etiquette manuals, guidebooks to nineteenth-century London, and travelogues by intrepid Victorian women. Visit her at MeredithDuran.com, on Twitter @meredithduran and Facebook AuthorMeredithDuran.

Reckless Reward:
The twenty starred blogs (*) below will giveaway one set (Reckless Reward!) of three autographed copies in the Rules for the Reckless series:Fool Me Twice, Lady Be Good, and Luck Be A Lady. You can enter on all participating sites, but you can only win once. To celebrate the fifth in the series, there will be five Reckless Reward giveaways per day beginning publication day, Tuesday, February 28th – Friday, March 3rd. U.S. only.

Monday, February 27th
Books for Her

Wednesday, March 1st
*Book Nerd
*Reviews by Crystal
*All About Romance
*Booktalk with Eileen
*We So Nerdy
Roses Are Blue
In the Hammock
Feeding My Addiction Book Reviews – Spotlight
Romance Book Reviews for You