Review of "Exposure: A Love Story" by Tracy Ewens 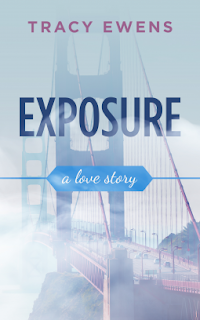 If only life were as simple as smiling for the camera.
After years of braving the Arctic’s frigid temperatures or endless hours tracking the Spirit Bear to capture the perfect shot for National Geographic, Meg Jeffries decides to move back to the city—San Francisco. She wants a life with more stability. The kind that lets her see her family more than once a year and comes with owning a toaster or a full-sized tube of toothpaste. But creating her new “normal” is not without its obstacles. Meg is confident and successful behind a camera. A little extra publicity can’t change that… until it does.
Westin Drake is famous for fast cars and box office sales. Yet he’s a terrible driver and secretly hopes his fifteen minutes is almost up. West moved from Los Angeles to San Francisco, looking for some substance and time near his family. But now that the buzz of his next film, Full Throttle – Floor It, is hitting maximum fervor, West keeps everyone at arm’s length so he can protect the people he loves… until he can’t.
When the public mistakes a simple kiss on the cheek for a budding romance, Meg and West are caught in a media frenzy. Somewhere amid the backseat getaways and plastered smiles, Meg discovers the man behind the glossy photographs, and West wonders how he’ll ever let her go once the cameras stop rolling. Love is never simple, especially when the world’s watching. How much are two people willing to expose for a chance at a true happily ever after?

On the surface, there is nothing really wrong with Exposure.  The writing is fine.  The characters are fine.  The romance is fine.  If you want anything better than fine, well this isn't the book for you.  There is nothing new or innovative about the plot, which honestly felt forced.  Meg and West meet and he kisses her on the cheek -- in no world is a chaste kiss on the cheek something that gets the tongues wagging.  Not in the present-day, anyway.  Maybe if this book was supposed to take place in the 1950's, this would have been believable, but it didn't and it wasn't.  The fact that this is the catalyst for the whole book is ridiculous.

I also had an issue with the pacing, which was a bit all over the place.  The first 2/3 of the book takes place over a series of months, encompassing three media events in which West and Meg pretended to be a couple, but the last 1/3 takes place over a few days/weeks.  This would have been alright had the relationship developed evenly over that time period, but it didn't.  For the most part, the romance was all in the final third.

It also bugs me that West was very obviously supposed to be a caricature of Vin Diesel and his Full Throttle movie series is the fictional equivalent of the Fast and the Furious franchise.  Personally, I hate it when authors do this because it makes me think of the real person, and it always makes me wonder if that is the point.  This type of thing feels like lazy writing -- as if the author is relying on the readers' feeling for the real person that the character represents to create feelings for their character.

There were a few things about Exposure that I liked, the biggest of which was the way both Meg and West struggled with the normal, everyday things that all adults have to go through.  For Meg, she was trying to figure out how to go back to living in one place instead of traveling from place to place, looking for the next great picture.  Buying a toaster is a big thing for her.  Her entire story arc is basically an ode to "adulting".

I also enjoyed the romance, once it actually showed up, and how Ms. Ewens used San Francisco and its cultural history as a backdrop.  In fact, my favorite scene involved West dragging Meg out of bed at 4 in the morning to take a walk across the Golden Gate Bridge.  I am not a bridge person and I hated my own experience walking across that bridge when I was a kid, but I enjoyed their fog-filled adventure.

Another part of this was the fact that West lived in the Fairmont Hotel, which is you know your San Francisco history is kind of iconic.  (The original hotel was built in 1906 and was supposed to open right around the time of the earthquake.  Unfortunately, things didn't work out for the original structure and it had to be rebuilt -- by Julia Morgan, the first female architect in the US!). Then, of course there was the fact that West's room was nicknamed The Tony Bennett Room and Meg constantly referred to the bed as The Tony Bennett Bed.  This was a little odd for me, considering my grandfather actually knew Tony Bennett (they served together in WWII), but it was also sweet.

Finally, the relationship between West and Towner, an employee at the hotel (I'm not quite sure what her job actually was), was awesome.  West needed someone who was going to tell him what he needed to hear instead of what they wanted him to do or what they thought he wanted to hear.  Their relationship was very maternal and you could tell that she wanted what was best for him.

While Exposure is not going to be one of my favorite books nor will I ever re-read it, it was enough to make me look into Ms. Ewens's backlist.  Hopefully, one of her other books will be more my speed.