Review of "On the Surface" by Kate Willoughby 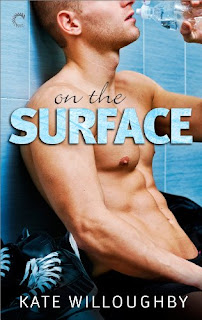 NHL player Tim Hollander lost his temper one time and threw a water bottle at an abusive fan. After “Bottlegate,” he’s traded to the San Diego Barracudas, where he’ll need to keep the bad publicity to a minimum while proving he can still compete with the younger guys on the ice.
Erin Collier is a pediatric nurse who’s never seen a hockey game, but gets in line for Tim’s autograph at a PR event in hopes of impressing the doctor she has a crush on. When an obnoxious fan gets pushy toward Erin, Tim rushes to defend the pretty stranger, throwing a punch in the process.
Grateful for the rescue, Erin agrees to stand by Tim during the resulting press conference and host him at a hospital charity event. Their chemistry is palpable, and soon their lives are intertwined. But Erin doubts a hockey player is capable of anything resembling a real relationship. And if Tim can’t get her to see beyond what’s on the surface, they’ll never last longer than a single season…

On Friday, I got an email about a promotion Carina was doing -- join their mailing list and get a free e-book.  Even though the book was a hockey romance and I don't think I've ever read anything in that sub-genre before, I decided to take a chance on On the Surface, especially since it has decent ratings on both Amazon and Goodreads.  I was actually pretty excited to read this, but, unfortunately, the excitment didn't last all that long -- 2 chapters, in fact.  Normally, I don't review a book that I have read so little of, but I had to make an exception for this travesty of a book.

The book starts with a scene in which, Tim, the hero, a disgraced hockey player, who was traded from the Chicago Blackhawks (a team that has won the coveted Stanley Cup twice in the last 10 years - both in real life and in this book) to a fictional team based in San Diego, and his friends/teammates are trying to come up with a new number for Tim to wear.  I actually liked these characters and found their struggle to keep up with the younger members of the team (all three men are in their 30's, which unless your name is Jager, is fairly over the hill for any sport) to be relatable.  As a matter of fact, I enjoyed all of the interactions between these characters.  If the book was about Tim's relationship with them, I probably would have made it through to the end.

No, my problem was with the heroine, Erin, who within the span of a few pages made me want to throw my iPad against the wall.  Had this been a physical book, I might actually have done it too.  You see, Erin is not a very nice person.  She's judgemental and seems to view other women as her competition.

Jackie was very pretty and fashion-model tall even in flats. At five feet three inches, an A cup and with girl-next-door looks, Erin felt like an awkward child when standing next to her.  And yet, Jackie couldn’t and didn’t cook.”  -- Excerpt From: Kate Willoughby. “On the Surface.” iBooks.


I don't know about you, but I don't like it when fictional characters (or people in general, for that matter) feel the need to (a) compare themselves to other people and (b) tear down those same other people in order to make themselves feel better.  There was no need to list all of the reasons Jackie made her feel awkward and there sure as hell was no reason to then put Jackie down because she can't cook.  The way the line about Jackie not being able to cook felt so very immature and made me think of a certain scene in Clueless:

This whole thing smacks of Erin trying to find a reason to eliminate Jackie from the competition (of course, the whole idea that they were even competing for anything was all in Erin's mind).  It makes me think that to Erin women exist solely for the titilation of men.  We are supposed to be the beautiful, doting wife, who has her husband's dinner ready for him when he gets home from work.  Yeah, I don't particularly subscribe to that line of thinking.  I hope that most people don't think this way in 2017, but based on the 2016 election cycle and the crop of Barshit crazy Republicans who ran for president, and the king of the crazies that managed to claw his way to the White House with the help of his Russian buddies, I'm starting to wonder if I'm an outlier and that people do think this way more often than not.

Anyway, Erin and her best friend, Tammy, don't stop there.  It seems that Erin's whole raison d'etre is to get a cute, divorced doctor to notice her, and anyone who gets in her way is fair game, especially if that someone is Jackie of the "bimbified" scrubs.

'It’s better than tempting him with tacky underpants.'  Tammy nodded. “Okay, you get points for class, but I really don’t think the guy is in the market for a wife.” " -- Excerpt From: Kate Willoughby. “On the Surface.” iBooks.

I'm sorry but I don't view anything that Erin does as classy -- she's basically trying to win a man based on how feminine and un-slutty she is.  To make matters worse, she's willing to pretend that she is something that she is not just so she could impress him.

The whole plot of this book is that Erin meets Tim because she's trying to impress her crush.  I'm not sure how she thinks that is going to play out as I didn't get that far into the book.  I noped the hell out when she started judging a patient's mother because she likes hockey.

'Do you like hockey, Nurse Erin?' Dr. Oliphant asked.  The lie rested on the tip of her tongue, ready for launch. Dr. O loved hockey. Surely he wanted his girlfriend to like it too.
But, she reminded herself again, a relationship had to be built on honesty.  “I don’t really know,” she answered truthfully. “Isn’t it über violent?”  “There are fights, yes,” Dr. O said. “And hits.”  “That’s my favorite part,” Luke said. “When they hit each other. My mom likes that too.”  That surprised Erin. Luke’s mom seemed like such a serene woman.
Excerpt From: Kate Willoughby. “On the Surface.” iBooks.

I am not a hockey fan.  Most of my knowledge of the sport comes from a lifetime of listening to my dad and brother talk about it, but I know pleanty of women and girls that love watching it.  Just because a girl or a woman likes watching a sport, even a violent one, does not make her less of a girl. I don't know if there is such a thing as toxic femininity, but if there is, this book is the perfect example of it.