Better Late Than Never: Review of "Valentine Kisses" by Ann B. Harrison 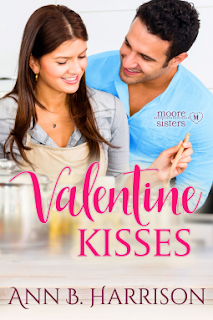 
I am a Food Network addict.  No, seriously.  While typing this, I am watching the newest episode of Worst Cooks in America, where the recruits are learning how to grind their own sausages--and no, that is not a euphemism).  When I saw Valentine Kisses involved a fictional Food Network star and Masterchef winner, I was excited.  Books with cooks are totally my catnip.  If you wanted to trap me, just set out a bunch of romances about a cooking, some Pop-Tarts, and a can of Coke (or 7 Up) and your job will be done.  All Ms. Harrison had to do was write a readable book and she would have had me.  Sadly, Valentine Kisses failed at this most basic thing.

Bella Moore thought she had everything she ever wanted. The host of a hit reality show, she’s at the top of her career. So when her show goes on hiatus for six months and she finally has downtime, she decides to return to her roots and visit her sister in Cherry Lake. What she doesn’t expect is to love the town and the temporary chef position she’s taken on at the Lake Hotel.
Jake Woods is focused on his son and his job as the local fire chief. Things are moving along nicely until the new chef at the Lake Hotel almost burns the place down. Jake knows that Bella inherited a mess from the chef before her and he’s keen to help her.
After weeks of working together in tight quarters, Jake and Bella can’t ignore the sparks between them. But Bella’s stay in Cherry Lake is only temporary and Jake still hasn’t recovered from losing his wife a few years ago. They’ll have to decide whether or not the flame between them can survive without the heat of the kitchen.

As I said, I was really down for this book and am so disappointed that I couldn't even manage to read 174 pages.  What annoys me the most is that there were glimpses of the good book it could have been.  I did enjoy Ms. Harrison's writing, although it could use a little bit of polishing.  I don't know her process and I'm not well-versed in the whole self-publishing thing, but I think that Ms. Harrison would benefit from the expertise of a professional editor.  A lot of this book's problems would hopefully be solved by an editor's red pen.

The biggest issue I had was that it seemed like certain plot points were added in just to have something there.  For instance, the cover copy makes it sound as if Bella returns to Montana because her show is on hiatus. This is a completely reasonable thing for someone to do.  Wanting to see her sister is reason enough for her return to Montana., but Ms. Harrison decided that Bella couldn't just go home for a visit, so she gave her something that forced her to leave Seattle, where for some reason her show was taped (as far as I know, most of the Food Network's shows are filmed in New York City--not Seattle).  I don't understand why this was necessary, and to make matters worse, when this plot point was brought up, it wasn't done consistently.

Spoiler:
Bella leaves town because someone is stalking her and her producer's plan is to put her up in a small cottage in the same Montana town were Bella's sister lives. He does not give her any protection and no one, including Bella, thinks this is a bad idea. In fact, Bella doesn't tell those around her--people who would be in danger should said stalker come after her while she is with them--that she has a stalker at all. Also problematic is the fact that Bella lets people take photos of her, which more than likely ended up on their social media accounts, giving her stalker the ability to easily find her.

Another thing that bugged me was that Bella is both surprised that Jake doesn't recognize her as being a famous chef while at the same time is surprised that other people in that small town do recognize her.  Maybe she was just so wrapped up in everything that has happened in the three years since she won Masterchef that she figured everybody would know who she was, but this just wasn't depicted very well.

I really wish this book would have worked for me, but it didn't.  It barely held my concentration and when it did, it just didn't make sense.  Research isn't a dirty word.  It might be time-consuming, but if you're going to introduce something like the above spoiler, you need to know what you're talking about.  Sadly, Ms. Harrison didn't.