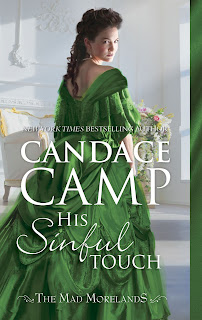 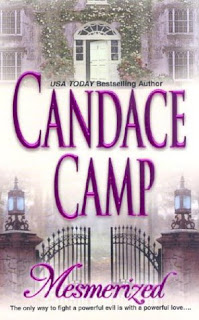 Isn't it pretty?  Of course from the cover I couldn't really tell that this was an historical romance.  There wasn't a couple of people wearing Victorian Era clothes (unlike most historicals, this series takes place in the Victorian Era and not the Regency Period).   This is not something that can be said for the 2017 re-issue cover.  If I had known it wasn't a contemporary romance, I probably would have put it back on the shelf and would have missed out on a fun series. 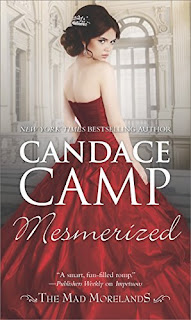 There is no mistaking this cover.  I do like the red dress, but is it just me or does the cover model look pissed about something?  I guess they were going for flirty, but they missed the mark.  Had this been the cover staring back at me, I never would have picked it up.

When I heard that Miss Camp was resurrecting the Mad Moreland series and releasing two more books, I was extatic. I absolutely adored the first four books and couldn't wait to see what had become of some of my favorite fictional Victorians.  While I enjoyed His Sinful Touch, I don't think it is quite up to the standard set by the original series.

A lost identity. A dangerous mystery. And a deep love that can conquer it all.When a mysterious gentleman arrives on his doorstep, Alexander Moreland is astonished to discover that the stranger is not a gentleman at all, but a beautiful young woman disguised as a man, and in great need of assistance. The woman remembers nothing except her own name, Sabrina, and has only the contents of her pockets as clues to her identity: a handkerchief, a pocket watch, a leather pouch, a torn scrap of paper and a gold ring.Sabrina is certain that she is on the run from someone, or something—how else to explain the bruises on her face and the pervasive sense of dread she feels? She’s also certain that she trusts Alex to help her, and she can’t deny the sparks that fly between them. As they race through the English countryside, Sabrina and Alex must solve the mystery of Sabrina’s past—before whatever she’s running from catches up to them.

For the most part, I really liked returning to this world, depite it being 12 years since the last book, An Unexpected Pleasure, was released.  In a way, it felt like I was checking in on some old friends.  Honestly, Ms. Camp could have relied solely on nostalgia the way many of the television revivals have done (I mean is there really anyone out there who didn't check out Fuller House just to see what the Tanners have been up to for the last 20 years), but I am glad she didn't.  Yes, it was nice to see Kyria and Rafe and Theo and Megan (we didn't get to see Olivia and Stephen from Mesmerized or Reed and Anna from Winterset), but it would have been doing Alex (and the readers) a disservice not to give him a story worthy of him.  I have to admit, however, that it took a while for me to get into this book.

Honestly, I don't know why the first 30-40% of the book was so slow, but it might have to do with the fact that Sabrina had amnesia and didn't know anything about her life.  A big part of the first third of the book involved Alex trying to figure out who Sabrina is and failing.  Most of this could have been skipped and the book probably wouldn't have suffered.  It really didn't take off until Sabrina meets three people from her past.

My biggest issue was the complete retrograde amnesia that Sabrina was afflicted with at the start of the book.  I know amnesia is a staple of early romances, but I hate this trope so much.  The way fiction portrays amnesia is all too often wrong and I have only read one book in which it was depicted anywhere close to normal.  Let's be clear, total retrograde amnesia is extremely rare.  People do not forget everything about themselves and in most cases the memories lost are only those surrounding the time the amnesia occured.

I also felt as if the paranormal elements were not as well executed as they were in the other books of this series.  In the other books, anything paranormal was used to enhance the story.  It was used as atmosphere or to provide clues to the overarching mystery.  This was not the case with His Sinful Touch.  In the beginning, Alex does use his talent, as he called it, in an attempt to figure out Sabrina's identity, but in the end, it is an ability he barely knew he had that saved his life.  This ability was more like magic than anything else and served as a Deus ex Machina.  So annoying.

The romance between Alex and Sabrina was sweet.  There was an instant connection between the two of them despite Sabrina's amnesia.  I love how protective they were of each other and that Sabrina was to one to rush in and rescue Alex in the end rather than having her play the damsel in distress she had been at the beginning of the book (and for most of her life prior to the start of the book).  One thing that did jump out at me was that there was more sex between Alex and Sabrina than any of the other pairings.  It wasn't explicit and not all of it was on the page, but you knew they'd slept together multiple times before the end of the book.

The best parts of this book involved the Moreland family.  I would love a book all about the Duke and Dutchess--Ms. Camp, give me their story.  We already know they have an HEA, so we don't have to worry about that.  I have a feeling their romance, which has been described several times in the series, would be so much fun.  The Dutchess is awesome and it is obvious that no matter how oblivious the Duke is to pretty much everything, he absolutely loves his wife.

I absolutely cannot wait for the final book in the series, His Wicked Charm, which will be released at the end of March.  We got a great introducation to adult Con and his heroine, Lilah, in this book and I have a feeling they will be a fun pairing.