Review of "Ace of Spades" by Sandra Owens 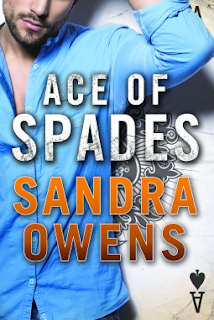 I was really excited for this book.  I devoured the entire K2 series a couple of years ago, but somehow I missed the first two books of the Aces and Eights series.  I'd hoped that I'd be able to jump right into this book without having read the others, and in a way I was able to do so as the main plot had nothing to do with the others.  However, I feel that had I known the characters' backgrounds a little bit more, I would have felt more of a connection to them, which would have helped me have a better reading experience.

Two FBI agents struggle with desire in the shadow of a killer, in the third installment of Aces & Eights.
Nate Gentry has been a rock for his two younger brothers since the day their mom walked out and left them with their abusive father. Now that they’ve grown up, he’s watched Alex and Court fall in love and settle down. But Nate isn’t made for romance. He keeps his relationships casual. And getting casual with his partner is a fantasy he can’t shake…
Taylor Collins has feelings for Nate, too—and though they run hot, her best friend on the team is strictly off limits. Until a spark in his eyes says, Go for it. But reaching out could prove to be a bad move now that they’re working closer together than ever, and on the most dangerous case of their careers.
An investigation into a brutal series of murders is stirring up bad memories for Taylor, and neither she nor Nate can imagine how close to home it’s going to hit. When it does, Nate will risk everything—including his heart—to keep Taylor safe.

I hate to say it, especially when I like the other books an author has written, but I almost gave up on this book.   It didn't pull me in the way that Ms. Owens's other books have and a part of me wonders if my experience reading the K2 series influenced me in picking this book up in the first place.  Based on the description, I probably would have pulled the trigger anyway (because I love a good friends-to-lovers story), but knowing how much I loved that series, I may have been more willing to give this one a try than if I hadn't been exposed to Ms. Owens's earlier books.

While I did enjoy this book in the end, it was very slow going for the first 40-45% of the book, which is not something I expected in a book about a serial killer roaming the streets of Miami.  The reason I nearly gave up on this book is that I was bored by it.  I didn't feel any connection between Nate and Taylor and didn't care whether or not the ended up together.  I'd decided that if I got to their first sex scene and was bored by it, I would put the book down and find something else to read, so when that was exactly what happened, I stepped away, searched my Kindle app to find something else I wanted to read, and eventually decided to finish what I started.

Once I returned to the book, determined to finish it, I became somewhat invested in the romance between Nate and Taylor and the more I read, the more I wanted them to be together.  The one thing that absolutely annoyed me though, was the idea that Taylor put her desire for a relationship with Nate on the back burner because Nate was not the kind of person who wanted to get married (because of reasons--reason for which he should have been in therapy).  I don't know if fuck buddies/friends-with-benefits is on trend right now (this is the second book I've read recently in which the heroine accepts a purely physical relationship with the hero because that is what the hero wanted), but if it is, it is one that needs to stop.

If a man is unwilling to be in a relationship, then he is not the one for you.  No girl (fictional or otherwise) should feel the need to accept less than what they're worth because the guy is a commitment-phobe (even if his issues are somewhat legitimate).  From the very beginning, Taylor was more invested in the relationship than Nate was, which meant that he had all of the power.  Taylor's actions made me wonder how low her self-esteem was.  Why did she think she should settle for crumbs with Nate when she could have the whole damn cake with someone else--someone who hadn't been pushing her away for months?  It made me so mad.  Taylor is a black belt and a kickass FBI agent, but for some reason, she didn't think enough of herself to look for someone who wanted to be with her completely.

The other thing that bugged me was the mystery/serial killer plotline.  First off, I was able to figure out who it was from the very second he was introduced.  I don't know what is going on with romantic suspense lately, but I've identified the killer almost immediately in the last three romantic suspense novels I have read.  Either I've turned into Sherlock Fucking Holmes or the mysteries are getting way too easy to solve.

In that same vein, during the course of the story something happens to Taylor's pet and I was convinced until the very end that the reason said thing happened was that the serial killer was punishing Taylor for getting involved with Nate.  This would absolutely have been something the serial killer would have done and it baffles me that Ms. Owens didn't have him do it.  She may have missed the boat with this, but I haven't.  Even though there is no evidence of this in the book, it has become headcanon.

Finally, the best part of this book is the fact that Doc and Saint from the K2 series make a cameo.  I love that Ms. Owens included them in this book.  I loved getting see two of my favorite characters and what's more, I love that K2 and Aces and Eights exist in the same universe, opening it up to more cameos in future books.

Since finishing this book, I've decided that eventually I will go back and read the first two books and then re-read this one to see if that helps me feel the connection between the characters, especially since there is a fourth book coming out and I really want to like that one.