The Internet of Things: Review of "Hacking IT" by Kimberly Dean 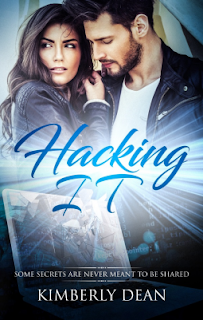 
Have you ever seen the description of a book and known immediately that it was going to be awesome and upon reading it were faced with the possibility that it might actually be better than you originally thought?  For me, that book was Hacking IT by Kimberly Dean.  A female white hat hacker using her skills to uncover a black hat hacker, who has stepped away from his computer and entered the real world?  Um, yes, please.

Independent software developer Kylie Grant is on top of her game in the world of IT. She has loyal clients, a good reputation, and a prestigious membership in technology giant Afire Industries’ small business accelerator. Things are going well until she stumbles across an innocuous issue with the lighting in the building where she rents space. When she digs into the problem, she discovers something unexpected—a hack.
The incursion doesn’t affect her, but Kylie leaves enough clues to fix the problem. That earns her a visit from Luke McAllister, Afire’s chief security officer. Luke is handsome and rugged and everything that Kylie likes in a man, but she soon finds that he is blaming her for the security breach. Before long, the two are on a collision course, but also secretly looking at more than each other’s digital footprints.
When a fluke accident sends Kylie to the emergency room, Luke fears that the beautiful developer is in danger beyond the online world. Little does he know that she is also hiding a secret that threatens to jeopardize their now sizzling relationship.
Can Kylie fix Afire’s problems without falling victim to the hacker? And can Luke learn to trust her and keep her safe before their enemy strikes again?

I love trying new-to-me authors, which thanks to Netgalley has become much easier than it used to be.  Before I started writing reviews for it, I rarely tried an author I'd never read before because books are expensive and bad books felt like I was throwing my money away.  With a price of $3.99 in digital, I might have pulled the trigger on Hacking IT, but chances are I wouldn't have even seen it had it not been for Netgalley.

What I really enjoyed about Hacking IT was that Ms. Dean was able to pull me in from the first page and kept me engaged until the end.  Some of my favorite authors haven't been able to do that lately (looking at you About That Kiss), so I was very pleased that this one did.

On top of that, this book, coming in at just 163 pages, feels like a whole book.  Many novellas suffer from their lack of length, but Hacking IT isn't one of them, and it actually felt as if it was longer (in a good way!) than it was.

I think the best thing about this book, and the thing at which Ms. Dean excels, is creating tension--both sexual and otherwise.  It isn't good enough to have the narrator tell us that the characters are worried (because of course, they're worried--someone is stalking them), but Ms. Dean manages to make you feel their fear.  This is something that not everyone can do and Ms. Dean does this with tremendous skill.

My one issue, and the reason I knocked off half of a star, is that the mystery was too easily solved.  I figured it out fairly quickly and kept wondering how anyone as smart as these characters were could have missed it.  This isn't that big of a deal, but it is annoying.  The main part of romantic suspense is keeping the reader in suspense and because I was so easily able to figure out who the stalker was I wasn't in suspense.  Just a little more subtlety would have sufficed, however, even with a not so mysterious mystery this book succeeds where many others don't.