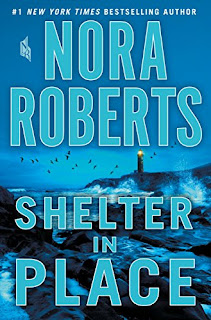 From Nora Roberts, the #1 New York Times bestselling author of Year One (December 2017), comes Shelter in Place—a powerful tale of heart, heroism . . . and propulsive suspense.
It was a typical evening at a mall outside Portland, Maine. Three teenage friends waited for the movie to start. A boy flirted with the girl selling sunglasses. Mothers and children shopped together, and the manager at video game store tended to customers. Then the shooters arrived.
The chaos and carnage lasted only eight minutes before the killers were taken down. But for those who lived through it, the effects would last forever. In the years that followed, one would dedicate himself to a law enforcement career. Another would close herself off, trying to bury the memory of huddling in a ladies' room, helplessly clutching her cell phone--until she finally found a way to pour her emotions into her art.
But one person wasn't satisfied with the shockingly high death toll at the DownEast Mall. And as the survivors slowly heal, find shelter, and rebuild, they will discover that another conspirator is lying in wait--and this time, there might be nowhere safe to hide.

This book should come with a Trigger Warning.  While I thought knew what I was getting with a book about the survivors of a mass shooting, I did not expect to actually read a depiction of the shooting.  The danger of having someone as talented at creating a word picture as Nora Roberts writing something like this is that you get the full, horrible picture in stunning 4k HD.  As I read this in an Uber on the way home from work last week, I had visible goosebumps on my arms.  I am not going to excerpt any part of the shooting scenes because I don't want to put myself back in the position of having to read it all again, but believe me when I say it was hard to read.  Anyone who has a heart or the ability to empathize with others will have trouble making it through this section.  It was the most well-written part of the book.  Nothing that came after could compare.  This is not a good thing.

One of the things that really bugged me about this book was that there were 10 completely unnecessary chapters all about the 13 years between the shooting and when the hero and heroine meet in the present.  Yes, you read that right--the hero, Reed, and the heroine, Simone, do not meet until Chapter 15, which my Kindle app tells me about halfway through the book.  These chapters, with the exception of a small part about Reed and the killer meeting, have very little to do with the book.  Others will argue that these chapters establish the characters and they let you get to know them better before the crux of the story takes place, but this is bullshit. I do not need a 10 chapter info-dump to understand that the heroine is mentally scarred from what happened in the mall when she was 15.  Never before was this a necessary step in writing a book--and it still isn't.  It is completely possible to get to know a character while the action is happening.

Another problem I had was the fact that the romance was barely there.  Because it took half of the book for Simone and Reed to even meet, we don't get enough time with them as a couple before they're 100% committed.  In fact, the moment Reed first sees Simone, he knows that she's the one for him.  To make it worse, there is no real interaction between them between a kiss and them having sex a week later.  There were no phone calls or text message. There weren't any flirty emails going from one person to the other.  There was ZERO communication.  To me, this shows that neither were interested enough in seeking the other out--they lived in the same small town, but didn't see each other once?

I really don't think that Nora wants to write romance anymore--and that's fine.  She can write a phone book and people will still read it.  Hell, I would probably read it.  The problem comes when she forces herself to write a romance into a plot that does not need one.  This book would have been a passable thriller, but because the romance between Reed and Simone was included in a way that was obviously there in an attempt to appease her fans, it could be neither a thriller nor a romance.  The relationship aspect of the book slowed it down, and that's not how a romance is supposed to work.  It is meant to enhance the story, not bog it down in unnecessary plot points just to satisfy fans.  Nora (not that you're reading this), write what you want.  If you want to write thrillers, do it, but commit to it.  Don't add a romance because that is what is expected of you.  When you write for the fans, it shows.

I hate to say this, but until Nora decides what she wants to write--whether that is romances, thrillers, or another genre--I'm done with her.